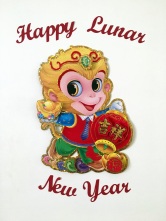 Chuc Mung Nam Moi (Happy New Year)!! Last Friday, we had about 30 of our friends over to celebrate Lunar New Year – Year of the Fire Monkey. There was lots of eating, reading of the Chinese horoscope, playing bau cua ca cop (squash-crab-fish-tiger), and celebrating with fireworks (just sparklers and bang snaps).

Decor was mainly store-bought with different monkeys, lanterns, and traditional yellow mums. Lucky money of $2 bills was the party favor.

For food, it was the usual mix of buy half/make half. I bought two Beijing ducks, roast pork, and vegetarian lo mein from Din Ho. I also bought pork and banana Bun Tet (Vietnamese New Year’s rice cakes) from MT Supermarket and fried them up.

I rolled and fried up shrimp firecrackers which proved a bit challenging with getting the oil temperature high enough with my new portable burners. I also had a setup for DIY spring rolls with lemongrass pork, ground tofu, and cilantro lime shrimp as the proteins along with lettuce, Thai basil, mint, carrots, cucumbers, and noodles for fillings. I attempted to make Korean rice cake soup, but my ratio of anchovy powder to water was off. Friends also brought pork dumplings, coleslaw salad, and tofu with beef.

For dessert, I made egg tarts which did not go well. I think the filling was tasty but using pre-made puff pastry was the wrong choice. At least friends brought mochi and chocolate covered almonds to add to the mix.

It was great to celebrate the lunar new year with friends, even though the house won (again!) at bau cua ca cop. At least we were only playing for marbles and pride and not real money. 🙂

This entry was posted in Food, Parties and tagged Lunar New Year, Tet. Bookmark the permalink.